I’m certainly not one to read too much into preseason games, but when your team has only won 7 preseason games in 9 years, you tend to get a little frustrated with even the “meaningless games.” I agree in the grand scheme of things that these games don’t mean much, but teams that are playing in late January and early February start setting the stage this time of the year. Not to mention, we hadn’t won a game since December of last year.

The Chiefs had their second longest drive of the game, on the first possession. Driving a massive 32 yards on 7 plays in 4:09, ending in a punt. Even though this drive did not end in a score, it did set the tone for the rest of the game by running four straight no-huddle plays. Alex found himself a new target in Donnie Avery, and Dwayne Bowe logged his first catch of 2013.

The first defensive series for the Chiefs started with a 49 yard completion from Big Ben to Antonio Brown. This is the second week in a row the defense has given up a 45+ yard play to start on defense. Todd Haley was foaming at the mouth trying to hate score on the Chiefs right away, marching 70 yards in 8 plays. Let it go Todd! The Steelers were stalled and had to settle for 3 points after a failed run and incomplete pass.

The Chiefs next 3 possessions ended with a turnover on downs, and two punts while the Steelers put another 7 on the board. At this point in the game I’ve already made my thumbs bleed with panic tweets. But hope floats at the 8:17 mark in the second quarter when Tysyn Hartman blocks an attempted field goal.

Alex Smith gets terrific field position at their own 48. The pocket collapses and Alex turns on the burners for a 38 yard run before getting hit late out of bounds. After tacking on a 15 yard penalty for the late hit, the Chiefs have first down inside the 10 yard line. Jamaal gets the next three touches, and then we settle for a field goal. There is nothing more frustrating than a drive like this that is given to us, and we can’t punch it in the end zone.

Chiefs come out blitzing in their next defensive series and force the punt, giving the ball back to Alex and the offense with under 2 minutes before halftime. I was expecting to write something bad in this part because, well, Chiefs. They surprise me by going 72 yards in 8 plays to score a touchdown and tie the game 10-10 just before halftime. This was one of the best drives the first team has put together yet. Very encouraging to see our two-minute offense that effective. 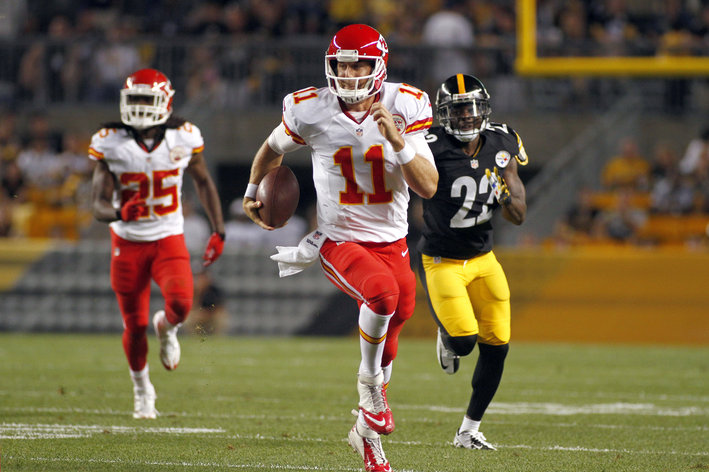 Thanks to Felix Jones playing football, and the Steelers drawing some flags the Chiefs force back-to-back punts to start the second half. Chase Daniel relieves Alex Smith of his duties for the night, and decides to go all run everything for himself after not being able get past his first read. On a few occasions Chase decided to take off after feeling pressure that just wasn’t there. Knile Davis decides to join the fun and promptly puts the ball on the ground.

The big Gradkowski from the Steelers goes off for an 8 play 65 yard touchdown drive to make it 17-10. On the ensuing kickoff Knile Davis redeems himself by taking it 109 yards to the house for 6 points. 17-17. I change my shorts and grab a snack as the 4th quarter starts.

Steelers come out in the 4th quarter and run a 13 play drive that eats nearly six minutes off the clock resulting in a 27 yard field goal by Mr. Suisham. 20-17 Pittsburgh. Chase Daniel comes back out and runs 6 of 9 plays in the no-huddle. Chiefs get into a 4th and 2 situation at Pittsburgh’s 31 yard line and decide to go shotgun formation. Incomplete pass and another turn-over on downs. I like Andy Reids aggressiveness with this 4th down stuff, I’m just not sold on the play-calls associated.

The Steelers are forced to punt at the 04:51 mark in the 4th quarter. Chiefs put together a 49 yard drive and tie the game up with a 38 yard field goal by Ryan Succop. 20-20. With under 2 minutes left Gradkowski goes with three straight pass attempts connecting on the third as time is winding down. Chiefs call a timeout and force the Steelers to give them the ball back with under a minute left. Chase Daniel takes three straight sacks to end regulation. 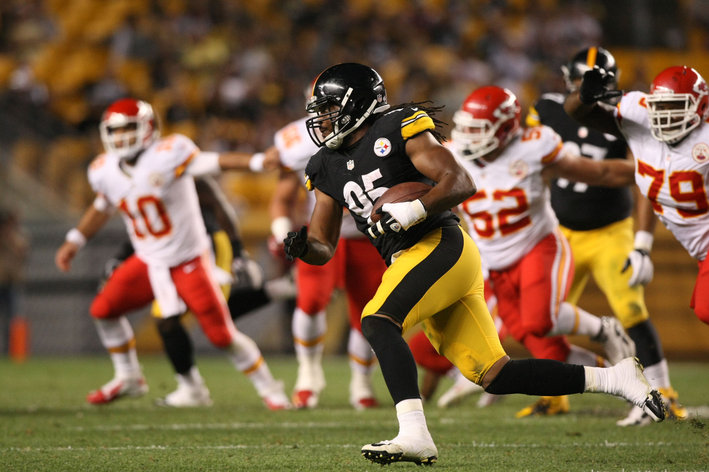 Chiefs get the ball to start OT and run their longest drive of the game at just over 6 minutes. After a few scrambles by Chase Daniel, and a little help with a horse collar call the Chiefs put themselves in a great position at Pittsburgh’s 15 yard line.

I had zero faith in Chase to put the ball in the end zone at this point, and he does just the opposite by throwing a beautiful pass to Rico Richardson in the end zone for the game winning touchdown. Mizzou fans waste no time in breaking twitter when their pride and joy Chase Daniel throws the winning touchdown. 26-20 no extra point needed for the W. 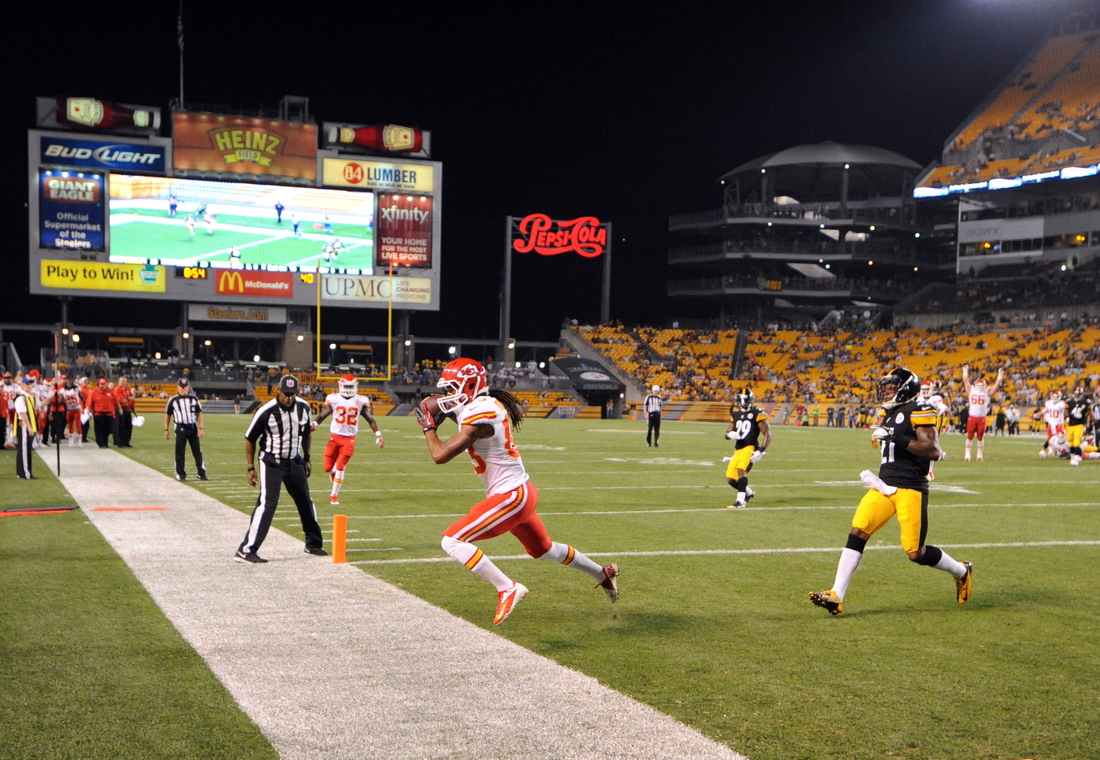 1. Our pass protection looks fairly good, the QBs just need to get rid of the ball quicker.

2. Alex Smith is so money with the play-action and roll-out.

3. Jeff Allen is making Branden Albert work twice as hard on the left side of the line.

6. Donnie Avery does in fact play for the Chiefs.

7. Chase Daniel was our leading rusher.