On this day, (January 23rd) 13 years ago , Derrick Thomas’ 1999 Chevrolet Suburban went off I-435 as he was driving to Kansas City International Airport during a snowstorm. He was going to fly to St. Louis to watch the NFC Championship game. Thomas and one of the passengers were not wearing seat belts and both were thrown from the car. The passenger was killed instantly. The second passenger, who was wearing his safety belt, walked away from the scene uninjured. Thomas was left paralyzed from the chest down, he passed away the morning of February 8, 2000 due to complications from the accident.

In his 11 seasons with the Chiefs, Thomas was responsible for 126 sacks and 642 tackles. He still holds the single game record of 7 quarterback sacks. He is one of only 25 NFL players to achieve 100 or more sacks. He was truly a pass rush specialist at 6’3″, 243-pounds.

His contribution to the Chiefs franchise was nearly immeasurable. Prior to his arrival in Kansas City, the team had made just one playoff appearance since 1971. In the 11 years that Thomas anchored the defense, the Chiefs finished first or second in the AFC West ten times, made seven playoff appearances, and won three division titles.

As much as anything Derrick did on the football field, beyond the NFL record of seven sacks in one game, and yet with all the sacks in his career, all the fumbles caused and recovered, and all the tackles, it was his contributions off the field that stand out to me. Derrick’s continuing legacy is the Third and Long Foundation, a reading program he established soon after coming to Kansas City and to which he devoted countless hours and finances. More than 1,000 children have gone through that program since it’s inception.

Derrick Thomas loved football and he loved people. His attitude was infectious. He made everyone around him pick up the pace. Still, he always had time for everyone because he had a huge heart and a smile that was as big as Derrick himself. 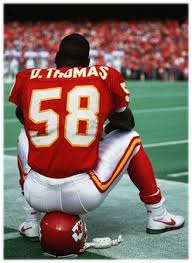 On January 31, 2009, Derrick Thomas was one of six players selected for induction into the Pro Football Hall of Fame. It was his fifth year of eligibility.  He was officially inducted in Canton, Ohio on August 8, 2009. The Kansas City Chiefs retired his number 58 on December 6, 2009 when the Chiefs played the Denver Broncos.